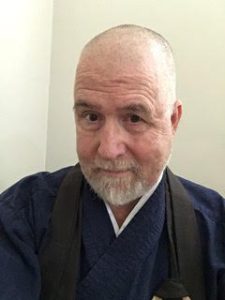 Edward Sanshin Oberholtzer is a Soto Zen priest, ordained by James Myoun Ford, Roshi in 2007 and given Denbo transmission in June of 2021. Edward was practice leader of the Spring Hill Zen Sangha back in the days when it sat in a dank basement in Davis Square, Somerville and long before it became one of the sanghas that gave birth to Greater Boston Zen Center. He currently lives in Lewisburg, Pennsylvania where he serves as the resident priest and teacher of the Joseph Priestley Zen Sangha and is an affiliate community minister with the local Unitarian Universalist church. He is also a teacher with the Empty Moon Sangha in Long Beach, California. Edward is deeply grateful for the wonders of video conferencing, but looks forward to us all being together. 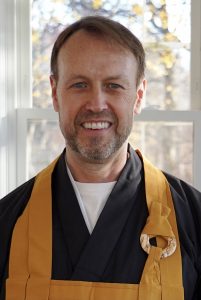 Jeff Kōgen Seul is a Zen teacher and preceptor in the White Plum Asanga (the lineage of Taizan Maezumi, Roshi).  He received Denbo transmission from Kevin Jiun Hunt, Roshi, in 2018.  Tibetan monks taught Jeff to meditate in the late 1980s.  Raised a Roman Catholic, Jeff then practiced Centering Prayer under the direction of Thomas Keating for a few years while also sitting zazen and studying Kyudo (Zen archery) with Kanjuro Shibata XX, Sensei, the Imperial Bowmaker of Japan.  Jeff became part of GBZC’s predecessor sangha after moving to Cambridge many years ago to attend Harvard Divinity School.  A practicing lawyer, Jeff is engaged in conflict resolution and peacebuilding work through the Peace Appeal, an international NGO, and he teaches at HDS as Lecturer on the Practice of Peace.  Jeff lives in Boston with his wife, Esther Whitfield, and their two children. 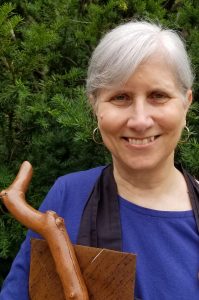 Julie Nelson is the Teaching Coordinator at GBZC. She has practiced Zen since about 2003. She is a professor of economics (emeritus) at UMass Boston; a writer on gender, ethics, economics, ecology, and Zen; the mother of two grown children and grandmother of one. She received Denkai transmission from Kate Hartland, Sensei in May 2021 and is now studying with Susan Myoyu Andersen, Roshi. Julie leads the Tuesday evening sits at  GBZC and organizes the teaching for Saturday mornings. Some of her writings on Zen are available on her blog. She has taken on the gold rakusu  on the understanding that the sangha will help her (in the words of another Zen teacher) be honest, try her best, follow the precepts, and not pretend to be anyone. 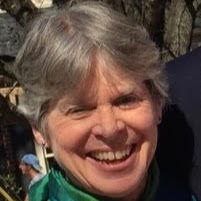 
Fran Ludwig began her Zen practice in 2007. She’s been practicing with this community since 2019. She is active in the mental health community and serves on the board of a large mental health nonprofit in Connecticut. Fran has an interest in the work of Byron Katie, Ken Wilber, and Gerry Shishin Wick and the integration of western psychology into Zen practice. 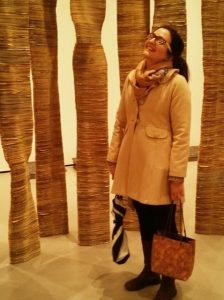 Rebecca Behizadeh began her practice of Buddhism in Nepal and India in 2011, and lived for a year at Upaya Zen Center in Santa Fe, New Mexico. She has a master’s degree from Harvard Divinity School and worked for a number of years for Life Together, a leadership development program of the Episcopal Diocese of MA. She has served as GBZC’s coordinator for Racial and Social Justice, and served as the president of GBZC’s board of directors for a number of years. 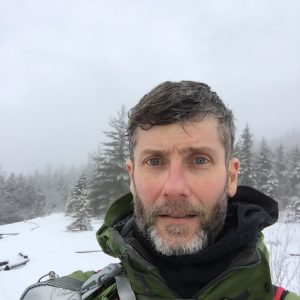 Mike Behizadeh has been practicing with this community since 2008. He works in the technology sector, and has an abiding love for the outdoors, especially hiking the White Mountains, as well as a deep commitment to caring for the earth. He regularly organizes Sangha hikes through the Middlesex Fells, and he’s also a haiku poet. 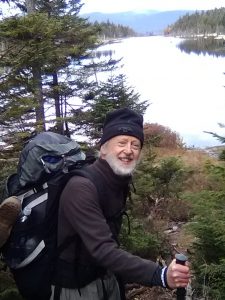 Pierce Butler is an emeritus professor of English at Bentley College where he taught English literature and writing for 32 years, including a signature course entitled Literature of the Spiritual Journey. He's been a student of Zen for more than 20 years, he has practiced with this community since 2013, and is an Assistant Teacher at GBZC. He studied the work of G. I. Gurdjieff for many years in a 4th Way community in Massachusetts, and he is the author of A Child of the Sun, a historical novel about Katherine Mansfield's sojourn at the Gurdjieff Institute. He also leads prison sanghas at Northeast Correctional Center and MCI Concord. 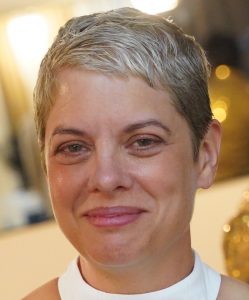 Jill Gaulding is an Assistant Teacher, a Practice Leader on Saturday mornings,  lead for the Programming Working Group, and a participant in Watering the Seeds and the LGBTQIA+ Group. A former attorney and co-founder of the advocacy group Gender Justice, she's currently a chaplain and executive director for Chaplains on the Way in Waltham. 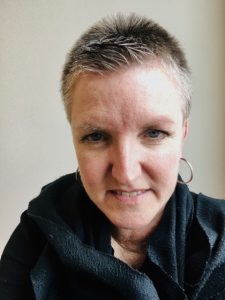 Karen McCormack is a founding practice leader of GBZC’s LGBTQIA+ sitting group and has been practicing with this community since 2007. She’s also a transition and employment specialist at Perkins School for the Blind who, along with her partner, is the loving parent of two dogs. Karen occasionally co-teaches GBZC’s Introduction to Zen Series. 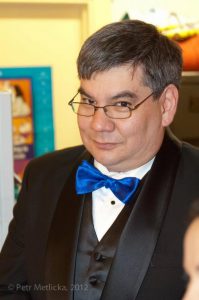 James Peregrino has been practicing with this community since 2006. He currently serves as practice leader on Tuesday nights and co-practice leader for GBZC's POC sitting group. He has been working in IT at Harvard since before the dawn of the Internet and dancing Mexican baile folklorico all his adult life. 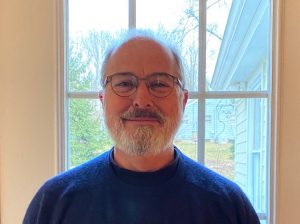 Brian Rarey’s practice began approximately 14 years ago, and he has been practicing with GBZC for 7 years.  He loves this practice of one continuous mistake. 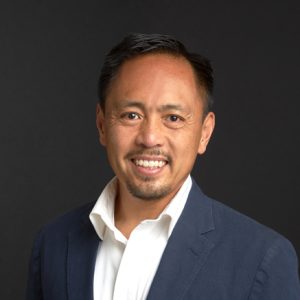 Vincent Cho currently serves as Clerk on the GBZC board and is co-practice leader of the Persons of Color Sitting Group at GBZC with James Peregrino. He is an associate professor at Boston College in the field of educational leadership. He has two children and innumerable pets. Although he has been scared off from Zen more than once, he has always come back. 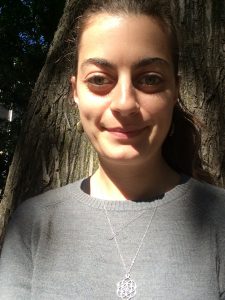 Rebecca Doverspike works as an Interfaith hospital chaplain, drawing from Zen practice.  She loves the ways poetry and Zen speak to one another (you can read her chapbook Every Present Thing a Ghost from Slapering Hol Press), and co-leads an Arts as Spiritual Practice group at GBZC. Rebecca is a Practice Leader on Saturday mornings, and is also involved in the Development Working Group. She loves the forest, swimming in lakes or sea, and making art for friends. She has found the GBZC community deepens her practice on this path. 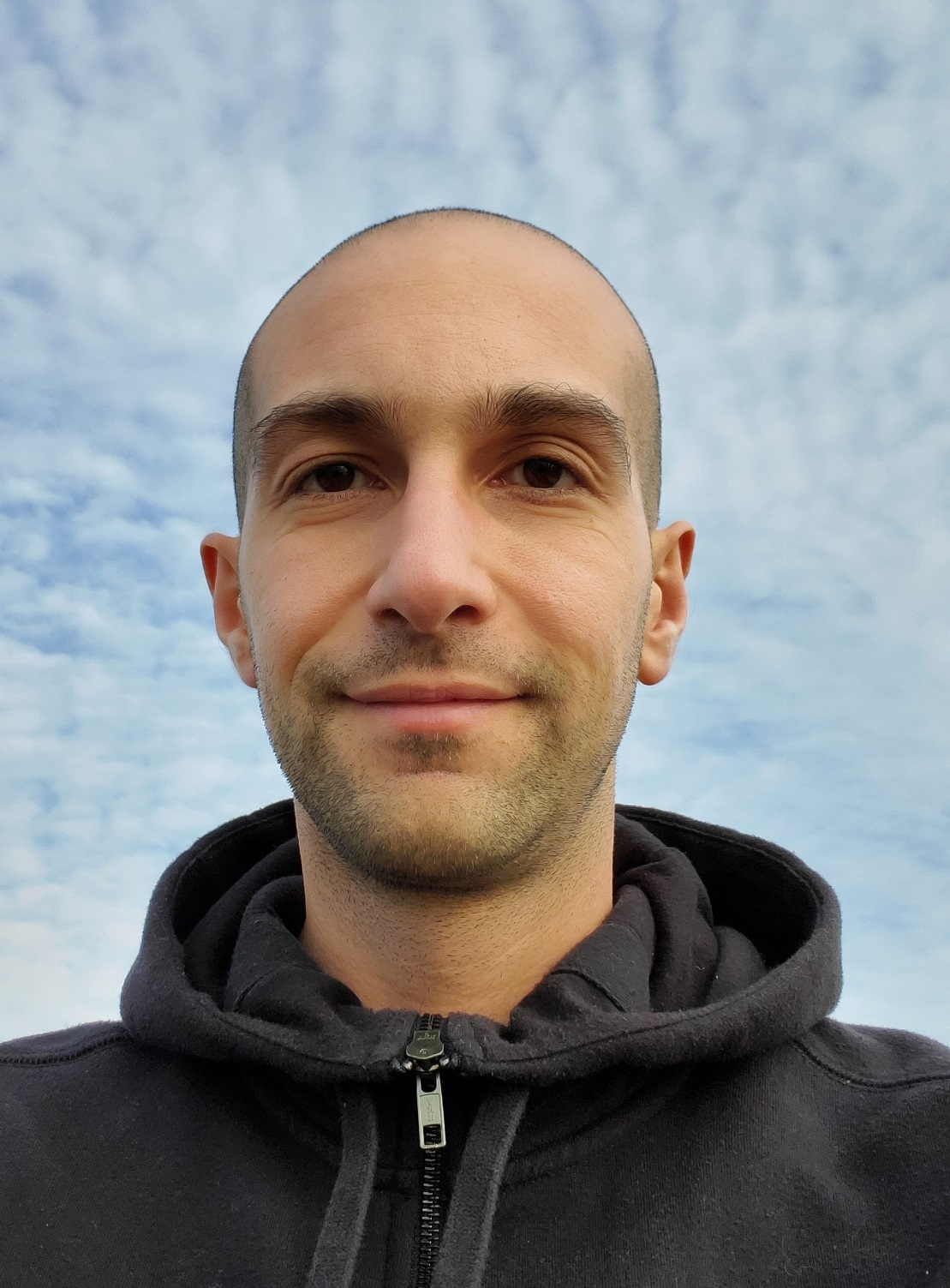 Hussein Elgridly has been sitting with GBZC since 2015, is a Practice Leader on Tuesday evenings, and currently serves as the the president of GBZC's board of directors. He wants you to know that there is nothing you need to be, or do, or know, to come here. When not practising not-thinking, he likes to cook, climb, and sail. 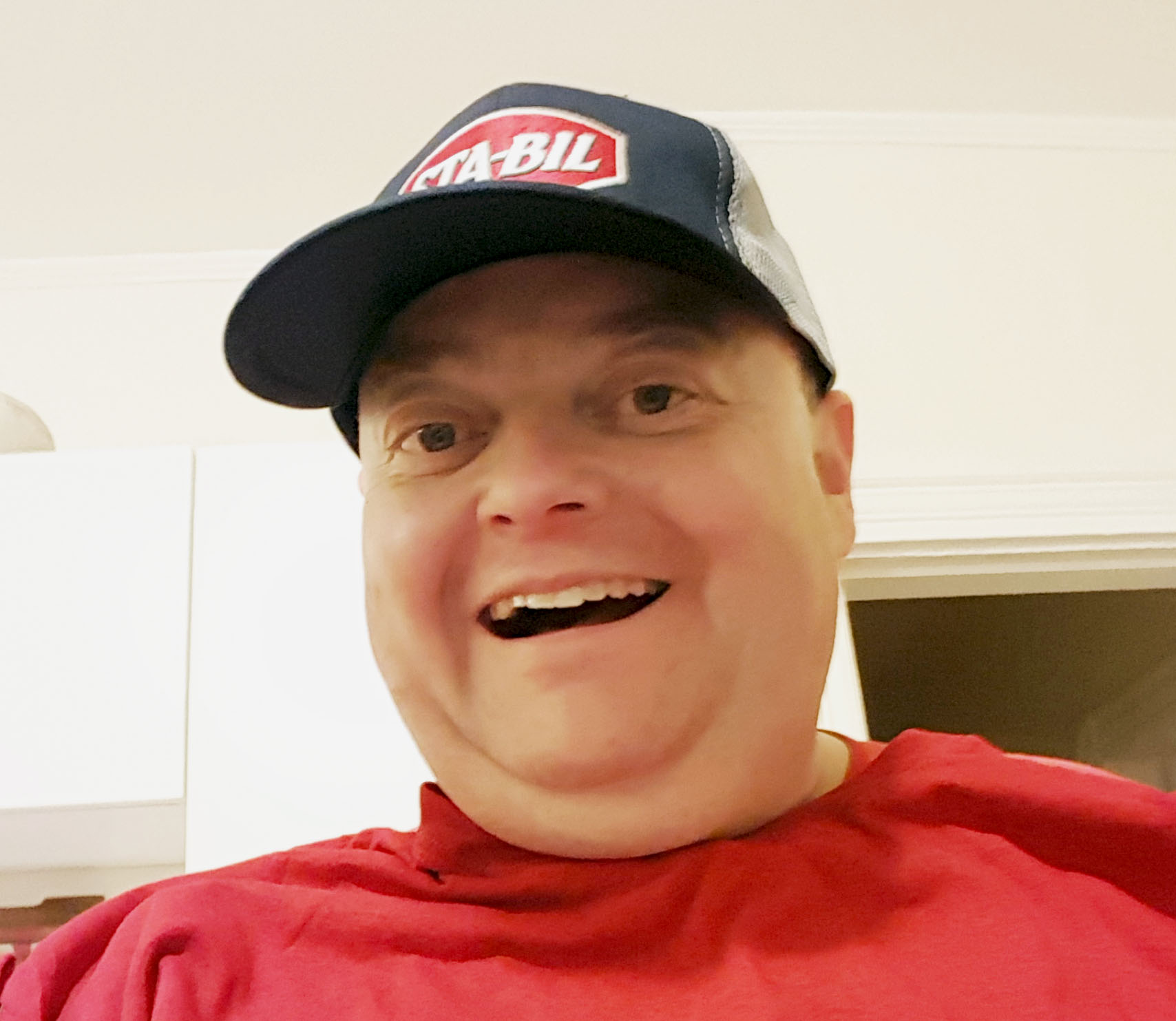 You’ll generally find Harry Gordon at GBZC on Saturday mornings, where he gratefully serves as a practice leader during our regular sit. If there's a Sesshin being offered, he's there. In his daily life he’s a freelance copywriter, comedian, and commercial actor.

Jim Lopata is a Practice Leader at GBZC. He loves the challenge of employing skillful means to slip Buddhist principles into his work as an executive coach. He holds a master degree from Harvard Divinity School, where he studied Buddhism. He’s fascinated by the concept and reality of Boston Common, where you may see him wandering around aimlessly, or with great intent.

Cheryl Morrow is a Practice Leader for weekend sits. She has been practicing with this community since 2011. For over 20 years she has run her own business as an engineering consultant with clients all over the world. She is now semi-retired and loves gardening and long walks with her dog in the woods. 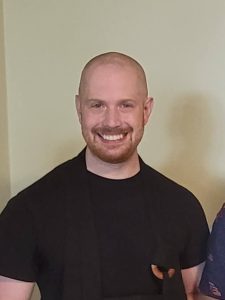 Vince Storie began practicing Zen in 2018 and began attending the Tuesday evening practice sessions at GBZC shortly after. He is deeply grateful for this practice and this community, and does his best to remember the countless interconnections we all share as the sangha of all beings. Outside the zendo, Vince is a physician and medical educator specializing in emergency care. He enjoys running, cycling, reading, and aimless wanderings with friends. 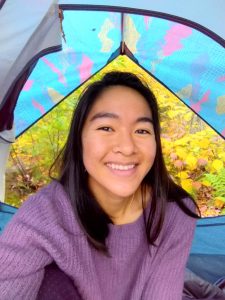 Leilani Chen is a Member at Large on the GBZC Board, who started sitting with the GBZC community in-person in January 2015, and now sits with them virtually in Minneapolis. Before moving to Minnesota, she facilitated the Persons of Color sitting group and led chants during Tuesday evening sits. She is a social worker who specializes in serving older adults and caregivers. In her free time, she gets outdoors with her family, curls up in bed to read a good book, and/or tends to her many houseplants. 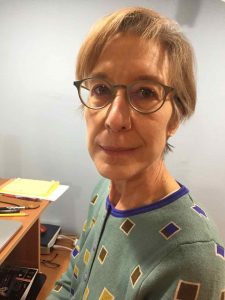 Elizabeth (Libby) Fay is a Member at Large on the GBZC Board, and has been a GBZC sangha member since 2017. She is a professor of English at UMass Boston where she teaches British Romantic literature, is currently finishing her tenth scholarly book, and is also a series editor for UMass Press. She and her husband live in Cambridge, and are the proud parents of a daughter and an elderly miniature dachshund. 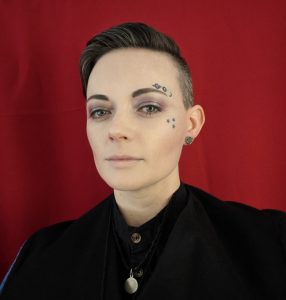 Caro Murphy (they/them) is vice president of the GBZC board, and has been practicing with GBZC since 2018. As a part of GBZC's Watering the Seeds working group and a co-leader of the LGBTQIA+ group, they bring an intention towards social justice into their embodied practice with the Sangha. Outside of GBZC, Caro is a professional game and interactive experience director/designer, teacher, and nonprofit leader.

Teaching roles at the Greater Boston Zen Center are designated by the following titles:  Sensei means “teacher” and indicates a teacher with full Dharma Transmission. A teacher who has been given only the first of two stages of Dharma Transmission is called a Dharma Holder. Such a teacher may perform all the functions of a Sensei except giving transmission. A Senior Assistant Teacher has not received transmission, but is authorized to give both Dharma talks and dokusan under supervision. Because of the extra ethical responsibilities that come with giving individualized spiritual guidance in dokusan, our Senior Teaching Community includes teachers with all of the above titles.  Assistant Teachers are senior students who may give talks under supervision. Practice Leaders are senior students who are knowledgeable about the forms of Zen practice and who may offer basic practice instruction to newcomers. Zen practitioners who ordain as priests, making a vow of service, may use the title Reverend.

Josh Bartok, former teacher and Spiritual Director, is no longer with GBZC. In December 2020 the GBZC board placed him on disciplinary suspension as a result of sexual misconduct and other abuses of power. Soon after that he resigned from all of his roles at GBZC.

Welcome to our Greater Boston Zen Center podcast, coming to you from Cambridge, Massachusetts. You can listen to dharma talks (teisho) given by our abbot Josh Jiun Bartok, Roshi and our two co-heads of practice Steve Wallace, Sensei and Dharma Holder Laura Wallace. For more information about teachers, events, and practice periods, go to our website: www.bostonzen.org